a blog of Thanksgiving...

On any given day, most of us can rattle off a long list of what we’re thankful for. This year, in particular, I think we are all keenly aware and thankful for our safety, our freedom, and the opportunities afforded us because we live in the United States of America.

I’ve had a hard time with Thanksgiving being largely glossed over this year, as the commercial Christmas season inches its way earlier and earlier. I have every confidence that it will begin in July pretty soon, bypassing Labor Day, Halloween, and Thanksgiving altogether.

Be that as it may, I am setting aside this day to focus on the gratitude it warrants, thankful for more blessings than I could possibly ever list in a blog…which doesn’t mean I won’t try to articulate at least some of them.

I’d like to start by offering up a prayer for those who have suffered recent losses. There are many this year, and I know the holidays are the hardest days when people are absent.

And for those battling illnesses of all kinds, you, too, are held in my thoughts and prayers with love on this day, in particular.

When contemplating what I’m thankful for, I like to let myself be random and go with whatever pops into my head as I’m typing this. So here goes…

Life is a gift. Today was not given to everyone, so no matter how heavy the burden we carry, we owe it to ourselves to say “thank you” and to wring every bit of joy out of it that we can.

Happy Thanksgiving…
Posted by Ilene Angel at 11:59 AM No comments:

For many people, maybe most, in fact, high school is a high point in their lives. It is the first glimpse into impending adulthood, complete with the requisite taste of first love, unchaperoned parties, stereotypes, peer pressure, and acne.

As with elementary and middle school, if you attended public schools, as I did, your classmates were decided largely, if not entirely, by geographical proximity to the school. And your class choices were mostly predetermined.

It took me a while to realize that this whole luck of the draw thing might be why I harbor no affection and little recollection of that time in my life, outside of shows and choir performances, that is.

The only friends I maintain from that period of my life, (minus recent reconnection due to the advent of social media), did not go my high school. We met in performing arts camp and Yonkers All City Choir.

I say this not because high school was traumatic or particularly awful, but because, when I think about my life, I consider it to have begun the day I stepped foot onto the campus of Northwestern University. (Go Wildcats!)

I chose Northwestern because it produced (and still produces) an astounding number of successful people in the performing arts. You cannot go to a Broadway show, concert hall, opera house, movie, or watch a TV show that does not contain Northwestern Alumni. And that was a good enough reason for me to choose it.

My freshman year found me living in a short wing on the 4th floor of a dorm called Allison, which, at that time, was all girls. Five of us from that little wing would go on to become roommates in the subsequent years, adding two more to our mix.

We represented diverse interests, majors, religions, and parts of the country, but we were all drawn to each other. Ultimately, our group would become doctors, lawyers, musicians, journalists, academic scholars and writers. That sounds dizzying to me now, but when we met, we were all just trying to find ourselves and our way in the world.

Life has a way of scattering us, of keeping us busy, and focused on what is immediately in front of us, not what has passed.

We live new places, take new jobs, make new friends, marry, divorce, have children. It is the natural order of things, I suppose. And usually, those things leave little time and energy for staying in touch, no matter how deep the affection.

So to find ourselves together again – all of us – nearly 30 years later, was an unbelievable feat…and treat.

Who are we now? Would we still recognize each other? Was what drew us together in the first place still there? And what was that, anyway?

Would the conversation be polite and superficial, or deep and meaningful? Would we get on each other’s nerves? Would we still like each other? Would the air be pregnant with awkward silences or filled with laughter and love? Would we have anything to say once we got past the initial details of catching up? Would it be all about memories, or would we be creating something new?

Most of us already turned 50. What wisdom had we acquired in a half century, and what would that look like? Who are we now? What had we figured out – about ourselves and about life? What brought us together now, at this particular moment, and why?

I can only speak for myself, of course, but I would say that each of us is at a crossroads in our lives, seeking something we didn’t know we should or would be looking for.

Yes, there were moments for reminiscing. And there was laughter – lots and lots of laughter. It turns out that Stephen Colbert had been to a party at our apartment. Of course, I wouldn't remember that, because I was too busy running around screaming, "We're gonna get evicted! We're gonna get evicted!" In my defense, that was right before the police showed up at our door. It does make for great storytelling years later, though. And we did not, in fact, get evicted.

In addition to the laughter, though, there was also depth and courage, compassion, acceptance, admiration and genuine love all around.

There was a feeling of gratitude that permeated every moment of the weekend. We were all wise enough to know that this kind of friendship is rare and precious and should be recognized and appreciated as such.

Relationships take effort. All relationships. They deserve the kind of care we’d give to something we treasure. They deserve the time for a text, an email, a phone call, and a visit. Friendships deserve our time and energy, because they sustain us throughout our lives.

If you’re reading this now, go phone a friend, reconnect, reach out, make the time. You’ll be glad you did.

To my roommates and all my friends, old and new, I count your friendship among the richest blessings of my life.

Thanks for stopping by... 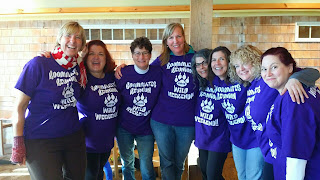 It is inevitable that whatever we choose to pursue in life will teach us lessons. Valuable lessons, if we let it. And this project is no different.

There are a multitude of things I have learned and continue to learn as I go along.

One of them is that things happen in their own time, not in mine.

When I look back on the list of intentions I set and wrote down (and I really did write them down) when I began to formulate this project, not one of the things was for it to be done fast.

In hindsight, that may or may not have been something I should have contemplated, but I was more concerned with the content, the spirit, and the hearts of those who would be co-creating it with me, as well as what it would be putting out into the world.

And so here we are. A verrrry loooong time after we began, and having blown past every release date I’ve projected along the way. And there are many reasons I could give you for it that are, in fact, all true. But it occurs to me as I look at what’s going on in the world that the reason may be one I don’t yet know or understand.

On a nuts and bolts level, I will tell you that I am working with the best and most talented people in the business, who, because of the shoestring budget of this record, are working for little to no money because they love and believe in this project.

I am humbled and unbelievably grateful for that, but it also means that they have to fit it in around their other, higher paying work, and I understand that, too. If I were working with lesser talent, we’d probably be done, but it would not be nearly as magnificent as it is turning out to be. So I am willing to trust that you will find it worth the wait.

On a deeper level, I hope the end result is that this album touches lives in exactly the way that it is meant to, that it uplifts, inspires, motivates, comforts, and empowers people. I know that’s a tall order, but at its best, don’t you think songs do that?

Every day that I work on this, I am both aware and grateful that you chose to go on this journey with me. You are as present in this record as those who joined me playing and singing on it.

You are the people who, for whatever reasons you had at the time, backed, supported and made possible the dream and decision I made to say something that matters and put something wholly positive out into the world musically.

In the weeks and months to come, I am going to be asking you again to join in with me in getting this up and flying. You can do that by spreading the word and the excitement now!

The album is available for pre-order on my website: http://www.ileneangel.com/ilenes-cds/

I know I will say it a gazillion more times – thank you!

Peace, love, and blessings to you,