How to Calm the Hell Down and Be Happy 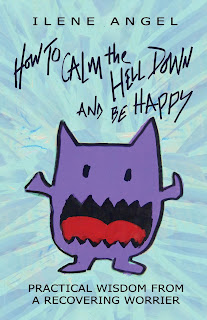 I read that in order to become a master at anything, you had to work at it for at least 10,000 hours.

I took out my calculator, because I wanted to be sure I had the numbers right. Yup, I am a master 46 times over at worrying, fearfulness, and anxiety.

Did anyone really think I hadn’t tried?

Finally, I decided I would do everything I could find that was recommended to relieve stress and anxiety and chronicle my findings in what I was certain would be a snarky little novelty book, more sardonic than serious and perfect for holiday gift-giving.

If you are new to this blog or to me, well, first – welcome! Thank you for stopping by. Second, I should preface this by saying I had already written one book, a memoir called In Search of George Stephanopoulos, and I swore I’d never write another book again. Oh, not because it wasn’t a fantastic experience, but because, a) it took me ten years, and who has a spare decade of their lives to spend writing another book? b) I still considered myself a singer/songwriter first and foremost. And c) I had the overwhelming feeling that I did not know what I was doing, which, frankly, never stopped me before, so what the hell, I’ll write another book.

Life enjoys surprising us, when we let it. And in my better moments, I let it. In this instance, it was taking me down a different road entirely.

It’s as if the Universe said to me, “You want to calm the hell down and be happy? I’ll give you some food for thought.” And it grabbed the steering wheel and made a sharp left, while I lurched involuntarily to the right and nearly fell out of the car.

What began as a lark became serious when I reached the point where all the recommended remedies fell short. At my core, I was still worried, scared, and anxious. And the stress was already wreaking havoc on my health. I could take all the deep breaths in the world, listen to soothing sounds, and put a statue of the Buddha next to my bed and I was still gonna be worried, scared, and anxious.

Until I could get to the underlying cause, nothing would significantly change. And that, my friends, is true for all of us.

It is easy, in the insanity of the world around us today, to believe our problems would be solved if outside circumstances were different. But the world has gotten this crazy because we have gotten that way. And if we want it to change, then we must change. Out of necessity, I’ve figured out some ways to do that that have yielded good results for me.

So I decided this time to let my courage win out over my fear, and my bravery to exceed my insecurities. I decided to allow for the possibility that I could actually help you in some way, because I’d not only worried for more than 10,000 hours, but because I spent far more than those 10,000 hours finding my way out of a lifetime of stress.

Here’s where you can pre-order How to Calm the Hell Down and Be Happy: