...when the TV crew shows up at your house 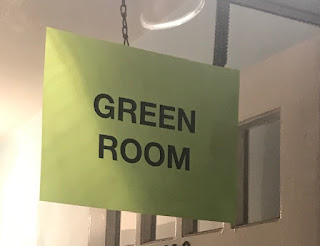 The Mueller report is out and I’ve been in, what could best be described as, a massive funk. Frankly, I don’t know how this wasn’t over at “Russia, if you’re listening…”

Be that as it may, I’ve decided to address other things here today, like how a TV crew showed up at my house for a couple of days of mayhem.

Let’s start with the easy stuff. Show of hands, who’s had a TV crew show up at their house?

It all started when I saw all manner of trailers, trucks, equipment, and people dismantling the insides of a house a few blocks away. They were filming something, but I’m not that nosy as to have stopped driving and asked what.

Then the owner of our local diner said they asked him to close the diner and take over for a week and he declined. That’s when I asked how much they offered to pay, and mentally decided if, for some strange reason, they ever asked to use our house, I’d take the coin and say, “Thank you very much.”

The likelihood of this happening was, in my estimation, ridiculously small. They were shooting on a wider block with nicer houses, frankly. So I did the ol’ “put it out there and let it go” thing.

When I came home the next night, my father said, “Let me tell you what’s going to be happening here tomorrow.”

According to my father, a man knocked on the door and asked to see our house and use the basement…for Craft Services for the crew. (Craft Services is the caterer.)

My house is 60 plus years old and that basement has flooded more times in the past few years than I care to relive here now, for you fine people. It is not the party central room it once was in its 70’s heyday. The orange and brown shag carpeting succumbed to the first of the more recent floods. But if the production people thought it would suffice, I wasn’t going to argue.

As far as I knew, people would be in and out of the basement and that was it. End of story.

I think we all know that’s not how this story ended. Not even close.

The production guy rang the doorbell early the next morning and informed us that no food would be served in our basement. Instead, they wanted the basement for the crew to warm up and use the bathroom. And because the class system is alive and well in Hollywood, the crew would use the downstairs basement, but the actors and other assorted, more important (?) production people would be housed upstairs, in my living room. That would be the same living room where my keyboard was set up to rehearse with my band later that day. Same day as Michael Cohen was testifying before Congress, but that’s neither here nor there.

I told the production guy I would relocate band rehearsal to someone else’s house, and I promptly…wait, why are they hanging Christmas lights on our bushes outside?

I asked if I could be a fan and get a picture with the actors in the show, Mr. Robot. The star is Rami Malek, who just won the Best Actor Oscar, but I also heard that Brian Stokes Mitchell was in the show. And if he was there, though he did not know it, he would be singing “The Impossible Dream” in my living room, while I died a blissful death.

I was quickly told that neither actor was in these scenes, so they weren’t there. I had my doubts about that.

I left my elderly father with countless strangers roaming in and out of the house, while I went to band practice for a few hours. I mean what could possibly happen in a few hours?

I returned home later, to a house lit up for Christmas in February and a sign on the front door, saying “Green Room.” All manner of knickknacks had been removed from all surface areas in the living room where the actors were. My keyboard had also shifted location.

Actors began wandering in and out, and my father, now an expert in such matters, gave a thumbs down to the Craft Services meal they provided him while I was gone.

Before I knew it, we were chatting with extras, I had regaled them with song, and I had strolled up the block with one of the actors to peruse the houses where they were actually shooting.

By around 2a.m., I had entertained cast and crew so much, they encouraged me to go to Central Casting and get work. It turns out I'm very funny when I'm sleep deprived and overstimulated.

As if on cue from Santa himself, it started snowing and Christmas was complete. Everyone left by 3a.m. Yes, 3a.m. And we were told they were behind schedule and would be back in the morning. I wasn’t sure dad and I had another day like this left in us. But what the hell, why not?

Midday, our doorbell rang again and the production guy said they were using a different house down the block. By late afternoon, they had cleared out everything, Christmas lights were down and sadly, no one had sung “The Impossible Dream” in my living room.

Once the crew vacated our street, it was as if we had dreamed the entire experience. Except I took pictures. And looked up Central Casting. And now had several new Facebook friends.

I assume the episode will air in December, on accounta the Christmas paraphernalia. I look forward to having our street immortalized on the little screen.

At the very least, I finally got to have my house decorated for Christmas. It might confuse the neighbors when the menorah resurfaces, but I'll cross that bridge when I come to it.

Thanks for stopping by and spending some time with me. Please tell your friends. The 10th Anniversary festivities are going to be starting soon and you won't want to miss it!!
Posted by Ilene Angel at 4:36 PM No comments:

...as the 10th Anniversary approaches

This little blog, In Search of…, is ten years old this month. When I started it, I wasn’t certain what a blog was, and I could never have foreseen the incredible adventures writing it would take me on.

I began this sweet gem because a publisher told me I should in order to get a book deal and gain a following.

In 2009, blogs were a relatively new thing, and Facebook hadn’t begun limiting who could see posts with links, so gaining a growing audience was not the daunting task that it is today.

The book I was shopping was my first, In Search of George Stephanopoulous – a True Story of Life, Love and the Pursuit of a Short Greek Guy.

It was a quirky memoir about trying to find Mr. Right while struggling to succeed in the music business in Nashville. Because it focused on a political commentator, I felt free to write unabashedly about politics. And because it felt like I was typing into the ether, I also felt free to let ‘er rip no matter what I was writing about.

Lately, I’ve been feeling stifled, shut down, and those are reactive places to be. I blame Trump for it, well that and my constant heartburn. The beauty of this 10th anniversary occurring now is that it has afforded me the opportunity not just to revisit past writing and share some of the more pivotal and funny pieces with you, but also to regroup and begin anew for me. And I have a lot to talk about.

So in the spirit of authenticity, I am looking forward to writing some new entries about how a TV crew showed up at my house one day, why I’m pissed off at the Methodists, and how my life actually changes, if it does, when I do the Marie Kondo uncluttering thing.

Thank you for stopping by and spending some time with me.

Get ready for the look back and the reboot!!

Xo
Ilene
Posted by Ilene Angel at 3:11 PM No comments: