I had this dream. Nothing as daunting as achieving lasting peace on earth – although, that is one I’ve had, too, but gathering some of my closest friends together for an evening of, well, what we did until the wee hours of the morning in my living room not long ago, which was play and sing our songs for and with each other, along with practically every other song ever written. (It was until the wee hours, after all.)

In theory, everything sounds like a good idea at the time you think of it. But I was serious. And as anyone who’s ever known me for more than five minutes knows, when I’m serious about something, I have a way of making it happen.

So within a couple of months of our gathering, a venue was booked, a date set, and the people I wanted to play with were asked. Let me explain the likelihood of five professional musicians being available to play on the same night together – none. But somehow the fates were with me on this one, because everyone managed to sign on eventually.

I had a vision in my head of what the night would look like. It would be my New York version of a Nashville Bluebird Café round. (For those of you who have no idea what I’m talking about, the Bluebird is a Nashville songwriters’ venue. And a “round” is four writers sitting in a circle taking turns playing their songs very informally.) Only in New York, there’s a stage and lights, and everything is more expensive. Plus the whole theater setting was far from informal.

In my vision of the evening, we’d each bring the fullness of our talents, hearts and souls to the table. Oh yeah, and also our humor. I live for the unscripted banter, the not knowing what’s going to come out of anyone’s mouth, including my own. I might possibly be the only performer whose pre-show prayer goes something like this: “God, please let me not suck. And oh yeah, please make me funny.” (Hey, far less lofty things have been asked for, believe me.)

Now, I could go into great detail about the journey leading up to last night’s performance – the one rehearsal we had, the changing of minds about song selection at the last minute, the chaotic nature of five very different personalities, not to mention…oh, why sugarcoat it…artists are all nuts. And I say that both with all the love in my heart as well as the full knowledge that I am one of them. But I was the nut whose brainchild this was, and so I felt like the success or failure of it rested on my shoulders. Yes, I wanted it to be great, but I also wanted it to be fun. My philosophy is if we’re having fun on stage, then so will the audience.

Show night was upon us. Did I mention my 50+ pound keyboard that I had to pack and haul? Let’s just put it this way, I have so many cuts and bruises on hands and various body parts that were used to prop up, navigate, maneuver and just plain schlep, that I look like I was mauled by a wild animal of some sort. And that was before I got to the theater.

When I dropped my keyboard off at the foot of the flight of stairs inside the theater (which was on the 2nd floor with no elevator), the manager came down to greet me, took one look at my ginormous keyboard case and said he’d give me a hand. And by “give me a hand,” I mean he just picked up the whole thing like it was made of Styrofoam and walked up the flight of stairs without breaking a sweat, let alone struggling in any discernible way. I briefly thought of offering him my firstborn, but then remembered I don’t have children.

Sound check was a little tense. Our one and only rehearsal had left us knowing we could sound great together, but that there was also ample potential for harmonic catastrophe, because did I mention we only had one rehearsal? Add to that the fact that all of us had never performed together before, though I’d performed with each person separately on many different occasions. Recipe for…well, it was the recipe for my word and lesson of the year – trust.

From the moment we walked on stage, the audience was with us. They laughed at our jokes; they participated when asked to join in, which was especially necessary on Garry’s song with the kazoos. And for those of you who were not present, I know you are really sorry about that now that you know there were kazoos. There was also a keyboard, two guitars, a ukulele, shakers, and a doumbek. It was a cacophony of creativity on that stage, I tell ya.

The show was everything I could have hoped for. By the time we saw the cell phone equivalents of the Bic lighters waiving in the air as we did our one cover of the show, our encore of “You’ve Got a Friend,” it was one big love-fest.

And though I’m waiting for pics and recordings, here’s a couple we took backstage before the show. There will be more in the next blog! Thanks for stopping by. Please tell your friends. 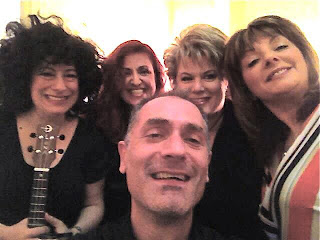 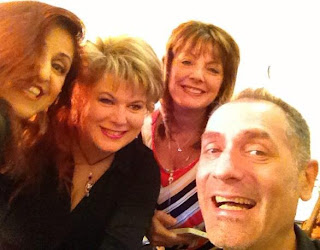