Taking the Time to Cherish the Moment

We always hear about “living in the moment,” because that’s all there is. But seldom do we make a practice of it. Today, because it is my father’s 85th birthday, I’ve made no other plans than to celebrate in whatever way he chooses and to stay fully present and grateful for this cherished time we get to spend together.

My father, Marvin, was born in 1928. It was a different era and a different world, to be sure. He grew up during the depression, which meant that my brother Steven and I were raised not only with the tales of how little they had growing up, but we were taught never to waste anything from food to opportunity, and with a code of behavior that said you stick by and stick up for your family and friends, and above all, that your word is your bond. (Yeah, it’s no wonder I can’t quite figure out how to traverse today’s landscape that is largely devoid of these attributes.)

My father came from an era where men served in the military, so he was in the army during the Korean War. If you know my dad at all, you know that he is the furthest thing from a fighter, so looking at old army pictures of him seems completely contradictory to the man I know. But serve, he did, as did his brothers. 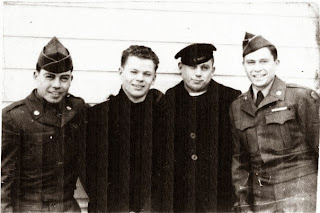 My father is the one on the far right.

At a servicemen’s canteen one night, he met my mother, and that, as they say, was that. They were married for nearly fifty years when she passed away a decade ago. 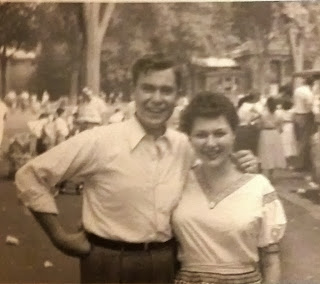 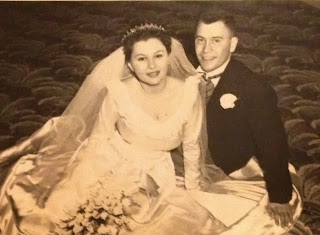 My father is the only one remaining of his family, outliving his three brothers, the last of whom died this past year. I know it weighs heavily on him in ways I can’t begin to fathom seeing everyone he loved go first. So today, I’m determined to linger longer in conversation, to appreciate the little details that make up our lives, because I know they will change and vanish altogether over time. Today I am not looking at the clock, not thinking about work that needs to be done, or anything other than this moment, with the man whose hazel eyes I inherited. Today I am celebrating the gift that his life is to me, both as my father and as a gentle presence on this planet. And whatever it is that will bring him joy, is what we’ll do. (I imagine this will be hanging with his diner cronies and possibly seeing a movie, but I’ll get back to you on that.) 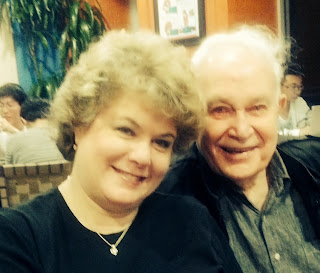 Before I close out, and because I don’t believe in coincidences, this is also someone else’s birthday who is dear to me – my cousin, Matthew. (He’s always gonna be Mattie to me, though. Sorry, Mattie.) It’s the 23rd and it’s his 23rd birthday. I’m sure that means something in numerology, but unfortunately, I know nothing about numerology. So Mattie, you’re on your own as far as the meaning goes.

Like my father, Matthew is one of those beautiful spirits on the planet to whom a mean thought would just not occur. (I love it that I’m related to two people like that, because, frankly, it gives me hope for the future of humanity. But I digress.)

Some of my favorite times ever were when Matt stayed with me and recorded some of my songs in Nashville. I had Christmas lights draped all over my apartment – hideously, because growing up with a menorah, how would I know how to properly hang Christmas lights? Be that as it may, there was late night Frosted Flakes snacking, the glow of the lights, and a heck of a lot of laughter that went on between the music making. And I hold those times as some of the most cherished memories in my life. So Mattie, even as your life is unfolding magnificently in front of you, I hope to God you never forget to appreciate the little moments that make for the best lasting memories. 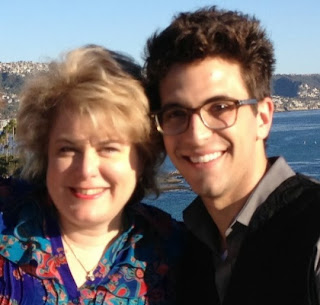 Me and Matt Angel in Laguna Beach

To the two birthday boys, I wish you a day filled with more love and joy than you can imagine, and for you both to know how truly appreciated you are.

To those of you kind enough to stop by, thank you. And please tell your friends. Peace and blessings to you – Ilene.
Posted by Ilene Angel at 2:11 PM