The Kids are Alright

This has been an emotional day. For many of us. For most of us.


My heroes today are children, thrust into a spotlight they were never meant to occupy. Or maybe they were. I find it hard to reconcile the movement with the deaths that finally jarred it into existence.


For years, I wrote anti-gun pieces for HuffPost and in this blog, and anywhere anyone would listen, as shooting after shooting took place. Maybe it assuaged my feeling of helplessness. Or maybe it gave voice to a grieving parent. I don’t know, because those weren’t the people I heard from.


As anyone who has been vocal about gun legislation can tell you, there are threats, and whether or not those threats are viable is the question we get to live with as the cost of taking a stand.


I’ll be honest with you, the past year and five months, roughly, have exhausted the hell out of me. I’ve looked at the world and thought it was beyond redemption, beyond my ability to impact any healing of it, and not really a place I particularly wanted to be, anymore. The only problem is I’m here. And so are you. And so are all of us who are tired of fighting fights that seems futile.


Leaders born of necessity. Courageous in ways they never should have had to be. And these kids are fearlessly showing an entire population that miserably failed them, how it’s done. How to behave like grownups in a world where the actual grownups act like petulant children. How to have a singular vision and purpose and relentlessly pursue it.


For the first time in a long time, I am looking at these grieving children and feeling a sense of hope and promise. And I cry because their loss has been our nation’s gain. And it’s not fair.


They should be contemplating prom dates and colleges, not how to get corrupt politicians to stop taking bribes from the NRA. But we didn’t get that done for them, so they will – with or without us.


As Emma Gonzalez stood silently in front of the massive crowd, for the time it took the gunman to ravage her school and take out her classmates, history was made. In the long uncomfortable silence. In the tears. In a sobering moment where a teenager had to remind us to do our freakin’ jobs as human beings.


I will always believe that the value of our lives is in how well we love. It is in how kind we can be to one another, how much compassion we have, how well we care for the least among us.


The children redeemed us today. And if we have any desire to love well, then we will return the favor. 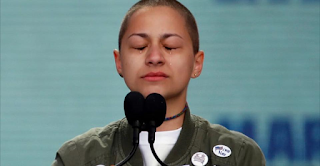