and then there was one

There’s a picture of my father and his brothers that I’ve always loved. I think it captured a moment, an attitude, a visible distinction between four very different personalities.

My father and his brothers grew up on the streets of the Lower East Side of Manhattan during the Great Depression, when survival required at least the appearance of toughness. It was a different world then. More character, less bullshit.

This world my father grew up in with his brothers had clear distinctions between right and wrong, a code of conduct that was adhered to. And you knew who your friends were. But more to the point, family could be counted on no matter what the circumstances.

I was raised with these same values, unknowingly, perhaps until I was an adult trying to figure out how to navigate a world that no longer seemed to place importance on these things.

My father always seemed the odd man out to me among the four brothers. And I don’t think it would be a stretch to say he appeared that way to the rest of his family, either. He preferred books to the city street shenanigans and to talk his way out of a fight rather than throw punches. So how he survived his childhood in the city, I’ve often wondered…until I heard stories about his brothers, who were more than happy to mix it up if anyone laid a hand on my father. Particularly his kid brother, Bernie.

My Uncle Bernie was neither quiet, nor shy. He was loud and blustery, prideful and strong, both physically and mentally. He was both an athlete and an artist, and he was not one to slip silently in or out of a room. You knew he was there, but when he was there, it was a party.

When I started out performing, I remember being backstage and hearing him above the rest of the crowd in the audience. He was a cheering section that others were envious of, but it was genuine with him.

By trade, my Uncle Bernie was a graphic artist, and it always seemed a direct contradiction to me of his personality. I somehow could never equate his persona with his work. And I think it was one of the many complexities of the man, who outwardly appeared to be one way, but inwardly was more sensitive than his bluster would lead you to believe.

Among his eccentricities was his firm belief that his birthday always fell on Thanksgiving – even though Thanksgiving is a different date every year. So to this day, I really don’t know his actual birthday. And truth be told, I’m not sure he did, either.

In his later years, when I visited him in his home in Las Vegas, where he and my aunt retired, I got to hear stories one on one that I’d never heard growing up. And my brother has said much the same thing about his visits with him.

My father never talks much about his childhood, except to reminisce about the lost art of the egg cream. But I recently learned that my uncle credited my father with opening his eyes to a world beyond 14th Street, a world with museums and culture a world away from the one they knew growing up.

And for his part, my uncle tried to explain to me the art of the business deal, the pitfalls to avoid, the things to ask for. He may not have known the music business per se, but he knew and understood art and commerce, and I listened to him attentively, because there wasn’t a thing he told me that day on my visit in Vegas that didn’t turn out to be right.

I equated my uncle with the strength he exuded weight lifting, an activity he, oddly enough, didn’t take up until his later years. He won all kinds of senior Olympic competitions, and I wondered how it was that I inherited none of his athletic prowess, and yet, got his propensity for debilitating migraines. Luck of the draw, I suppose.

My Uncle Bernie passed away yesterday, leaving my father the only one of the four brothers remaining. I can’t imagine a world without my Uncle Bernie in it, frankly. It seems so much less vibrant and colorful, and so much sadder. I also can’t imagine what my father must be feeling, the sense of aloneness, despite the love he is surrounded by still.

I wish I could tell my cousins, Lisa and Laura that it will get easier, that the loss becomes less profound as time goes by. But it doesn’t. We just figure out a way to go on.

My uncle was adamant that he didn’t want a lot of mourning when he died, but rather a celebration, a party, a good time. That was his wish for those of us who loved him – to remember him with joy. And I’m a big believer in honoring the wishes of those we love.

So here’s to celebrating the man. I know wherever he resides now, there’s a party going on and he’s at the center of it. Rest in peace, Uncle Bernie. 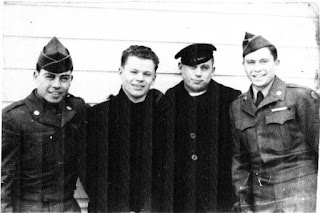 The four brothers - Bernie, Davy, Jackie, & Marvin
Posted by Ilene Angel at 11:08 AM